Monday started with a walk on the beach with Hubby.  I looked like a tacky tourist as the Wee One would say.  I had on my bathing suit, a cover up, a thin fabric cardigan, my photography backpack, and was carrying around my lens cap insulated coffee cup.  We walked up and down the beach enjoying the sunrise.

After our walk, we came in and ate breakfast as other people were waking up.  Eating on the balcony while watching the ocean waves come in and out and listening to the waves crashing against the beach was a real treat.  Paradise.

Once we got back upstairs, almost everyone was stirring so they got ready to go out to the beach.  I hung around the condo for a little while since I had already been on the beach twice that morning.  I did end up going down and staying down there for almost an hour.  During that time, the Imaginative One wanted to take another walk so we walked past the pier and saw sea gulls and terns attacking a bag of chips.  We found out the chips were not even opened when they started eating on them.

We were told about this great little hole in the wall grilled cheese restaurant, Cory’s Grilled Cheese, that was located near the Piggly Wiggly.  We needed a few more things so it was a good excuse to leave the beach for an hour or so.  We could not find that restaurant what’s so ever.  The restaurant was not located near the Folly Beach Piggly Wiggly.  It was located near the James Island Piggly Wiggly, a good 7 mile difference.  We ended up at Jack’s Cosmic Dogs.  Oh, my goodness.  The food was out of this world good.  I had a Galactic Dog which had chili, slaw, and cheese on it and drank Tang with it.  Yum!  Hubby got a grilled brat with fries that were covered with bacon and cheese and spicy ranch to dip the fries in.  The boys and I devoured a whole basket of plain fries.  They were that good.

I had a second cooking class that evening so Hubby drove me to that.  This time I was actually going to be cooking.  We were going to be making cheese straws with carmalized onion dip, pork wraps, baby bok choy and shitake mushroom stir fry, potato salad, and pecan crumble over vanilla ice cream.  Yum!  Since we got to downtown a half an hour before the class, I asked him to drop me off so I could take pictures as I walking to the class.  That was fun.

I stopped in a local café, bakery, and coffeehouse (Bakehouse) for a cup of Joe before the class.  While waiting for my cinnamon roll latte (which was the bomb), I spoke to the cashier.  It seems that a lot of Ohioans came down to Charleston because whenever she spoke to a tourist, the majority of them are from Ohio.  LOL!

As I walking, it was lightening and thundering in the distance so that was cool to watch.  I did not take any pics because it is extremely hard to take pics of lightening without a tripod and there were buildings in the way.

The cooking class was fun and relaxed.  We all had different stations so I helped make the potato salad.  After we all cooked, we sat down and enjoyed the fruits of our labor.  The lady who sat next to me was a social worker for the D.C. school district so it was interesting to talk shop with her.

Hubby picked me up and took me back to the condo.  By that time, it was bed time.  More on our adventures later.

Click on my picture to see pictures from our Super Trip Day 4. 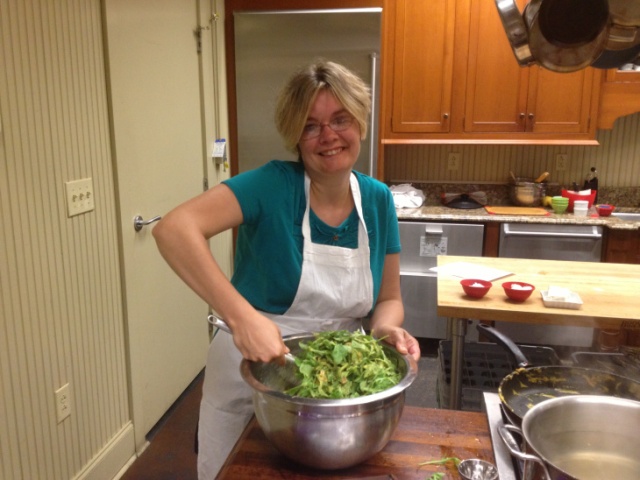