Forty-five minutes south of Fort Wayne is a little Amish town called Berne.  The founders immigrated from Switzerland by way of Ohio.  A lot of the architecture reminds me of what I think of when I’ve seen Swiss architecture.  I felt as though I was in another world when I was walking through the town.

It’s also an Amish town.  I had to remind Hubby to watch out for the Amish buggies.  I didn’t want to be on the news because we hit a buggy.

The reason for our visit was the clock tower.  The clock tower is designed after the Zytglogge in Bern, Switzerland.  Every noon, 3, 6, and 9, there is a glockenspiel when the clock comes alive.  There are 13 different symbolic representations during the 5ish minutes.  I took a video but since it was raining I was far away so you really can’t see the individual characters.  😦 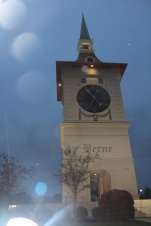 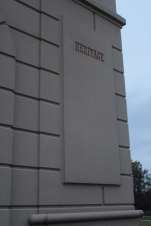 These were taken Friday at almost 7 p.m.  You can see it was raining.  Plus it was cold!  Hubby wanted to come back for the 9 o’clock glockenspiel.  I’m was like no way!

The next day we went to the Swiss Heritage Center.  They allowed us to pause the tour until we saw the glockenspiel.  Then we went back and continued the tour.

These are photos I took during the glockenspiel.  I was underneath a shelter so they are not close up shots.  You could certainly click on a photo and enlarge it if you want to see the actual characters. 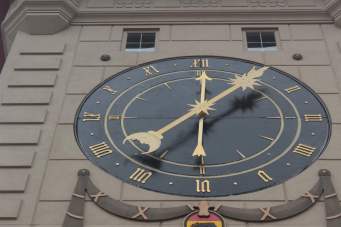 Some of the views from the plaza.  That is an Amish horse.  The buggy is behind the bush. 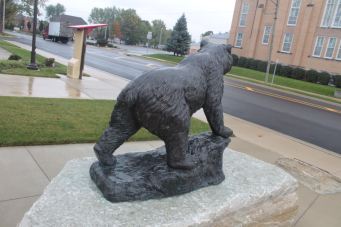 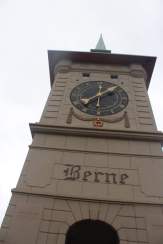 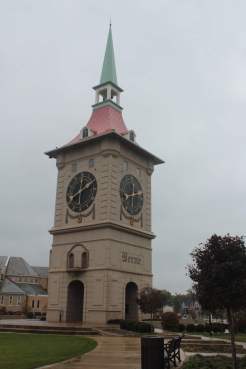 I hope you enjoyed visiting the clock tower.  I don’t know if next time if I’m going to share random photos of the town or the Swiss Heritage Center.  Maybe I’ll share the Amish furniture in the hotel we stayed at.  Who knows.