Let me take you back further than 14 years ago because that’s where this story begins.  It was September of ’97 and the fall quarter at the college I attended.  I was running late to one of my classes because I was doing my teaching practicum at a school that was 45 minutes away from my college.  I didn’t have a car so I was riding public transportation to and from the practicum.

I walked into the the teaching reading class and there was no seats.  Hubby was there and practically pushed one of his friends out of their seat.  Unfortunately for hubby, the professor found me a seat next to her.

A few days later, I had a art class and guess who was in my class.  Yes, hubby!  A few weeks later, the professor of the art class had a sick family member so 3 classes were canceled.  We went over to my dorm room and just talked.

In October of ’97, we began dating.  Our first date was at the Spaghetti Warehouse in downtown Dayton.

In January of ’99, I began student teaching.  During the time I was student teaching, we had a big snow/ ice storm that caused school to be cancelled for multiple days.  I ended up visiting at his parents’ house for a week so that I was not in the stuck in the dorms.

I also ended up with either a stomach virus or flu.  On the day I was sick, he went with his sister to find me an engagement ring.

The next day, I had class and all I wanted to do was sleep and rest afterwards because I was exhausted.  Hubby was insistent we go out.  Since it was a rainy/ dreary day, we didn’t get to go where he wanted to – Glen Helen Nature Reserve in Yellow Springs.  Instead we went looking for apartments.  He was ready to move out of his parents’ house and I was getting ready to graduate from college in a few months.  The first place we visited ended up being nice so he got on knee by the stairs in the apartment and asked me if I wanted the apartment and him.  We were engaged!

That weekend we went to Pittsburgh to visit my grandma, aunt, and cousin.  It was the first time I had been back there in almost 14 years.  It was a nice way to celebrate out engagement.

Our plan was to live with each other for a year, plan the big wedding, and then get married.  My grandpa put a stop to that plan.  He basically told us that he didn’t want us living in sin even though we had made a commitment to each other.  We decided to follow my grandpa’s wishes of us getting married.  We picked a date that was on a Saturday for the following year and then began marriage counseling.  We were going to elope a month and a half after we were engaged.

We ran into a snagfu while planning the elopement because we needed witnesses.  We decided to ask hubby’s dad and my grandpa.  If we asked them, then the rest of the family was going to be there at the wedding.  We ended up having 12 people at our elopement.   Eleven were family members.  One was a family friend.

It was a Thursday morning at around 11 am if I’m remembering right.  I only had classes on Tuesdays and Thursdays so I took the day off.  It was also World Day of Prayer.  Our current pastor married us and then we went out to eat at First Watch.  That night we went to see Shakespeare in Love.

14 years ago, today we were married.  Two days later, I turned 24.  A month later I graduated from college.  A year later, we had our big wedding and honeymoon at Walt Disney World.  A few months after our big wedding, I began working at my current job.  When I decided to marry my sweetheart, it began a snowball effect of life changes.  I cannot believe it’s been 14 years!

Enjoy pics from our bigger wedding a year later 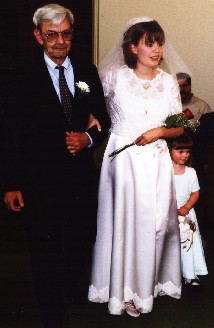 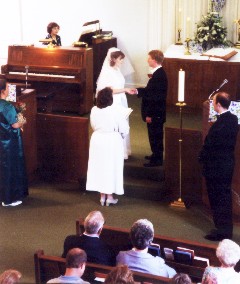