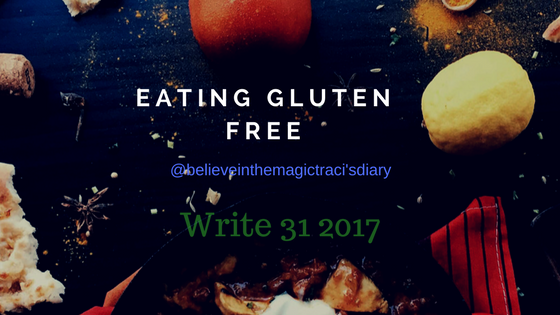 Before I begin sharing my favorite gluten free recipes, I need to tell my story about why I’m gluten free.

In late December 2016 through January 2017, I was suffered from headaches, irritability, and bloating.  I had gained a lot of weight in recent years.  I could not lose that weight.  I was miserable.

All of the sudden on the last Monday of January, a light bulb went off in my head.  I had been sick for 4 days straight.  During those 4 days, I ate a lot of glutenous foods.  So I said Hubby, “I’m thinking gluten might be the culprit.”

The next day, a Tuesday, I went cold turkey and quit eating gluten.  I remember not having much in my pantry that I could eat because most of it had gluten.  The first grocery bills were expensive because I was trying out new foods.

Slowly it became a routine.  I was completely gluten free from late January until late May.  No gluten passed through my mouth.

During the summer, I experimented a little bit and tried to eat some gluten.  It was then I discovered that gluten combined with sugar will either cause me to have a migraine, cause a personality change, or will cause me to become exhausted.  Since June 29, I have not had any pastry, cookie, or cake that has gluten in it.

I will occasionally eat some bread with gluten in it.  I’ve had it only once or twice a month in recent months.

I don’t like how I feel when I have gluten so it’s easier to avoid it.

There has been debates on whether people should be gluten free or not.  Especially when they are trying to lose weight.  It’s not a weight loss plan.  Let me say it again.  It’s not a weight loss plan.  Yes, I lost 10 pounds when I went gluten free and have kept that weight off.  I lost the weight because of the bloating from the gluten that was in my gut.

To know what gluten is, I’m going to share a video I found the other day that explains what gluten is and even gives you a visual.

Is eating gluten free hard?  Sometimes especially when you go out to eat.

Is eating gluten free doable?  Yes, it takes some planning before you go out to make sure you are eating foods that are truly gluten free.

You do need to do some research before going gluten free.