After the parade, the Wee One went with his grandma, aunt, and cousin.  They had Arby’s for lunch which made the Imaginative One upset.

Later on, the Wee One and my niece came over to my house to swim.  I took a few photos of them swimming with the Imaginative One.

The boys playing with my niece.  I have a few photos of her but I’m not going to share them since she is not my child.

Later on we had a dinner at my mother-in-law’s house.  I made the food and then brought it over.

We had hamburgers, hot dogs, potato chips, baked beans, potato salad, and carrots.  For dessert we had strawberries, blueberries, and homemade whipped cream.

Later on in the evening, my mother-in-law, the Wee One, and the Imaginative One went to watch fireworks.  We park at the local high school which gives us a great view of the fireworks. 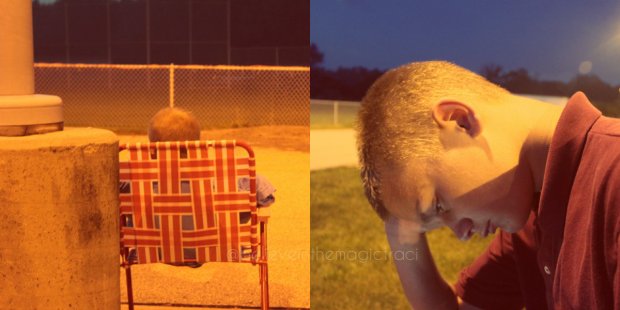 Waiting for the fireworks – The Wee One waited patiently which impressed us.  The Imaginative One did what he typically does while waiting.  He read a book.  We were sitting under the street light.

Here are some collages of the fireworks photos that I took during the 15 minute show.