This weekend was the Wee One’s first Boy Scout camp out.  His camp out was located 20 minutes from our house so it was not that far away.  He’s always been our homebody.  When he was in Cub Scouts, he would be the first one in the tent when there was any hint of darkness.  He would not emerge from his tent until it was daylight outside.

He shared his tent with one of his friends.  Since we have a 2 person tent and the Wee One is tiny, he had plenty of room for one of his buddies to sleep in the tent.  My child finds a way to get the young man help him with pitching the tent.  Then he got his buddy’s mom help carry his gear to the parking lot.

He had a lot of fun though.  That’s all that matters.  Now all of the gear is in my trunk.  It’s raining currently so they are staying there until the rain lets up.

While the Wee One was at his camp out, one of the leaders decided to have a computer programming merit badge over nighter for the older scouts.  The Imaginative One attended that over nighter.  He had a blast because he enjoys “playing” around with coding.  After he got home from the over nighter yesterday, he spent most of the day laying around or sleeping.  His energy level is back to normal today.

Yesterday our dog, Dobby, and I went for a walk at Koogler Prairie Reserve.  It was great to get out on a warm spring day.  Even though Dobby is 12 years old, he enjoys his walks.

So that’s what has been going on at the Believe in the Magic Traci’s house this weekend.  I also cleaned out my chest freezer, grocery shopped, and made crockpot freezer kits.  Instead of giving you a menu plan tomorrow, I plan to list the different freezer kits I made and what I plan to do with them.

Ever since I went gluten-free almost 8 weeks ago, it’s a challenge to find side dishes that are not Rice a Roni or Pasta Roni because both of those contain gluten.

Unfortunately those were the side dishes we had most often because it is something Hubby could make with limited instructions.  He is a simple man.

It’s been a challenge to find side dishes that are simple and gluten free.  Enter slow cooker sweet potatoes as a side dish.

It’s as simple as slow cooker baked potatoes.  However when you put the cinnamon, brown sugar, and butter on the sweet potato, it sort of tastes like the sweet potato casserole that is served at many Thanksgiving tables.  So good. 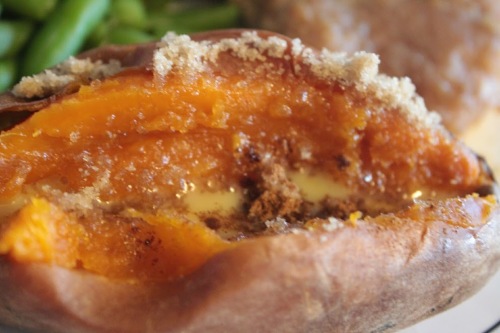