Have you ever been hangry? These energy balls will help ward off the hangry feeling.

END_OF_DOCUMENT_TOKEN_TO_BE_REPLACED

I had bought some wreath shaped pretzels to use for my Rolo Turtles not realizing the Rolos would fall through the wreath. I used one bag of the wreath pretzels for my cinnamon sugar pretzels. Since I had another bag to use up, I found this recipe. Hubby had leftover popcorn oil from an event he hosted in November so this was a perfect way to use the pretzels.

Enjoy these at your Christmas get together or even on New Year’s Eve. Yum!

Oh and the best part of this is there is no baking involved. Sweet!

I know there is some debate on whether Cheerios is really Gluten Free or not.  Since I have not been diagnosed with Celiac’s disease and only have a sensitivity to gluten, I decide that Cheerios are okay for me.

The Wee One loves this snack mix.  While it was cooling on the baking sheet, he would randomly walk into the kitchen, take a handful of the mix, pop the snack mix into his mouth, and then walk out.

I added some pumpkin seeds to my snack mix.  Yum! 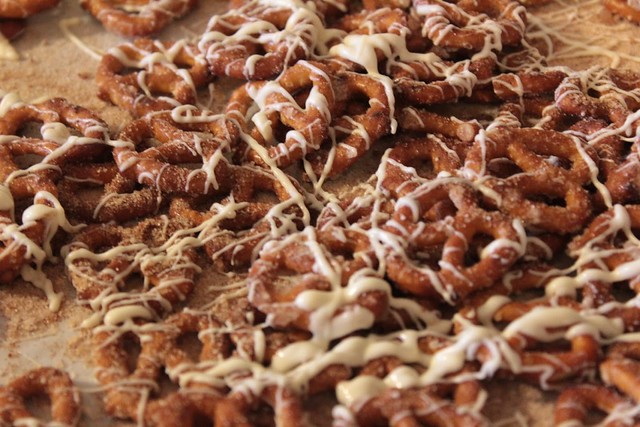 The Imaginative One is now in Boy Scouts and goes on hikes.  One of the hiking trips requires him to carry all of his supplies and food for the weekend.  Trail mix is one of the easiest items to carry.  We make our own so we can customize it to his likes.
END_OF_DOCUMENT_TOKEN_TO_BE_REPLACED

Also known as Rice Krispie’s treats.  You can use either Rice Krispie’s or you can you use an off brand crispied rice cereal.
END_OF_DOCUMENT_TOKEN_TO_BE_REPLACED

When I was younger, my mom would make this dessert / snack.  She would take the finger jello to church or even to Rainbow receptions.  When I eat finger jello, I’m reminded of my youth.

END_OF_DOCUMENT_TOKEN_TO_BE_REPLACED

I saw this recipe on another new blog (at least to me) called Mommy’s Kitchen.  Since it was both looked easy to make and yummy, I knew I needed to try it.

Today we were going out to a local outdoor mall to play in the water fountain.  I decided to pack our lunch and knew that the S’Mores snack mix would be a perfect complement to our lunch.  When I had the Imaginative One try the snack mix, he wanted to eat only the marshmallows and chocolate chips and not try the Golden Grahams cereal.  I then showed him that you could make a minature S’Mores using two Golden Grahams, a marshmallow, and a chocolate chip.  He tried it and loved it.  The imaginative one figured out the recipe on his own.  He was so proud of himself.

Later that evening, we went to see fireworks at an event called Tattoo.  Tattoo is sponsored by the Air Force and is free to the public.  They have a concert and planes that do tricks.  The evening ends with fireworks.  My father-in-law decided to take my niece, nephew, and two sons to see the fireworks.  We sat across the street from where the Air Force Museum.  Since we were going to have sit and wait, I decided to make some of the snack mix to bring along.  My mother-in-law and niece both agreed that it was yummy!

This recipe is a keeper.

Without further ado, the recipe

It’s that simple!  This is a real winner.