When I was pregnant with the Wee One, the third trimester was just awful.  I had a lot of  preterm labor scares.  I went to the hospital 3 times prior to his actual birth because of false labor.  Once was by ambulance.

I had been traveling between buildings that school year.  Right before leaving the middle school, I started having Braxton Hicks contractions.  I drank a bottle of water while driving between the buildings.  The contractions would not let up so once I got to the other building I mentioned how I was having contractions.  It was decided that it would be best for me to go by ambulance to the hospital.  Once I got there, the contractions stopped which was a good thing.

Another time was during my college class I was taking.  A classmate drove me to the hospital to be checked out.  When the nurse found out I was a student, she thought I was a high school student.  Funny thing is that I was 30 years old!

A week before the Wee One’s birth, I once again had Braxton Hicks that wouldn’t let up so once again we were at the hospital.

Four days later on Father’s Day, early labor started and I was miserable Sunday, Monday, and Tuesday.  He was on his way.  There was no doubt about it.

The day before he was born, we went out to the girl scout camp and hiked.  Yes, you read that right.  I hiked the day before the Wee One was born.  Then I went to Young’s Dairy and was absolute miserable so we went to the doctor’s to check me out. 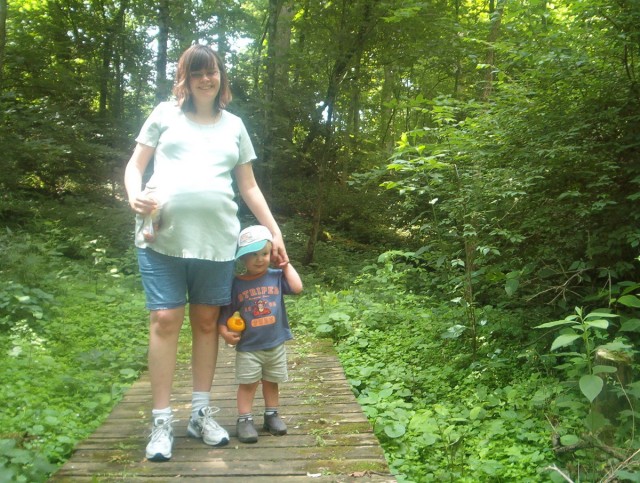 Out hiking – The last photo of the Imaginative One being an only child.

They told me that I was in labor but it was not time to go into the hospital just yet.

The Imaginative One and I took a walk that night.  He was so sweet when I needed to stop every once in a while to catch my breath.  He knew his mommy was in pain.

The next morning, I went to Walmart to spend a gift card from my grandma in Pennsylvania.  That’s when the contractions picked up.

I laid down when I came home from the store.  I could barely talk or walk.  I tried to nap but the contractions were so strong.  It was time to go to the hospital.

My sister took care of the Imaginative One while we were having the Wee One.

I don’t remember what time we got to the hospital.  All I can remember is that at around 9 or so, the nurse said I was going to be the next patient to have her baby.  I didn’t think I was ready at that point because I was only dilated to maybe a 6 or 7.

The nurse allowed me to push when I felt it was necessary which really helped.

At 10:22 (22:22 by military time) on June 22nd, 2005, the world welcomed a new person who is the master of his destiny.  He does not allow his small stature define who he is as a person.  His personality is bigger than life.

What they did not tell me was that he had his cord around his neck.  That’s why the nurse allowed me to push when I felt it was necessary.  She did not want me to worry.  She just wanted him to be born safely.

The day after his birth

Happy 12th birthday the Wee One!  We love you with all of our heart.

4 thoughts on “Happy Birthday, Wee One!”