You can also use already cooked shrimp if you don’t want to cook the shrimp.

I’ve been trying to figure out the best way to make a peppermint mocha that wasn’t full of a lot of calories.

Can I be honest? The ones from Starbucks are not my favorite. They add way too much chocolate. I would rather have the peppermint shine through. I love peppermint in my lattes so that makes sense.

Yesterday I found a peppermint mocha ground coffee at Aldi’s so that is what I’m using for the coffee part of the recipe. So good.

Note: You either need to use a frother or froth it without a frother. Place milk and cacao powder in a mason jar, place the lid on it, and then shake it. (Arm workout) Once it’s increased in volume, remove the lid carefully. Microwave it for 30 to 60 seconds.

Roger’s Magical, Mystical Questions: You have just been gifted a magic wand that specializes in completing household chores. You can request the completion of only two household chores. Which chores would you assign your wand to complete?

I would assign my magical wand to do the dishes. I’m constantly having to get on my oldest to put away the dishes. (There needs to be several commands and mom about to lose her cool.) So dishes need to be done by the wand – less gray hairs for mom.

The other chore would be to sweep the floor. That is a constant ongoing battle. I don’t know how we have so much dust. I swear it reproduces quickly because I can sweep it up and then half an hour later, there is more dust. Never ending battle.

At the local Wizards-R-Us store there was a sale on handshake shockers, instant darkness pellets, and levitation pills. Which of these ‘party thrillers’ are you more likely to purchase?

I would think the handshake shockers would be funny when I’m in person with students. They might not think so. However, I think the levitation pills might be helpful. My classroom is across the entire building from where my students’ classrooms. (I’m an Intervention Specialist and do pull out services.) There are days I need to get from one of the building to the other quickly. Those levitation pills will be helpful.

In the alley behind Wizards-R-Us, there was a tradesman selling a Love Potion. The sales pitch was too much for you and you yielded and purchased one vial. What do you do with it?

I might give it to my 17-year-old to drink. He doesn’t need a girlfriend. Done that already and he’s decided it’s not worth the hassle. However one day, he might want to use it.

You are the Great Clearinghouse Winner of a new ‘good luck’ potion – Felix Felicis. It has to be used within the next thirty days or its potency becomes diminished. Do you use it? Do you give it to a friend in need?

I could always use some good luck. It depends on what is going on in my life at the moment I get the Felix Felicis. If I feel as though I’m walking on the mountain tops, I would definitely give it to someone in need. However, if I was in those valley lows I would consider using it for myself but may give it away. (I know I’m being vague.)

If everyone spoke their mind, would this world be a better or worse place?  Why?

Our society has become a cancel society. When you say something people don’t agree with, then they want to cancel you rather than letting you explain, apologize, or make amends. I wish we as a people could truly speak our minds but the reality is too many people get hurt when they don’t agree with you. I’ve learned that sometimes it’s better not to say anything at all.

Can achieving nothing make a person happy?

During my sister’s adult life, she really did not accomplish anything. She was very unhappy in both her skin and in her life. As the years progressed, she became more of a hermit until she died 4 years ago. Her legacy is one of heartbreak because I truly believe she missed out on life.

How do you know if you love someone enough to marry them?

Unconditional love, cannot imagine life without them
The person trusts you enough to “allow” you freedom to be yourself. (I put allow in quotations because you don’t need permission to be yourself.) They don’t control you.

GRATITUDE SECTION  (as always this is optional)

One breakfast/snack item you can meal prep is my fruit on the bottom yogurt cup. I love to top my yogurt cups with granola.

This granola is a great one because it is very versatile. I have given you 5 different flavor combinations that are all very tasty.

I portion out the granola for the week. If you get the 4 ounce Mason jars and fill it up to the lip, that is the perfect amount of granola.

What you need for this recipe:

Extra – Add ¼ c. of pumpkin puree to the wet ingredients.

One of my mom’s favorite meals was Johnny Marzetti. When I was Googling the history of the name of Johnny Marzetti, I noticed a lot of the recipes bake it. The difference with my recipe is that I don’t. My recipe is more of an American goulash.

It was named after a restaurant in Columbus that shut down in 1972 when the owner died.

When I made it this week, I modernized or added some depth to the spaghetti sauce that I used in the dish. I added a splash of dry red wine while the sauce was simmering. So delicious!

It’s a simple pantry item dish. Here’s what you need to make the dish.

You can leave the wine out if don’t want to use wine. I just used it to add some depth to the dish. 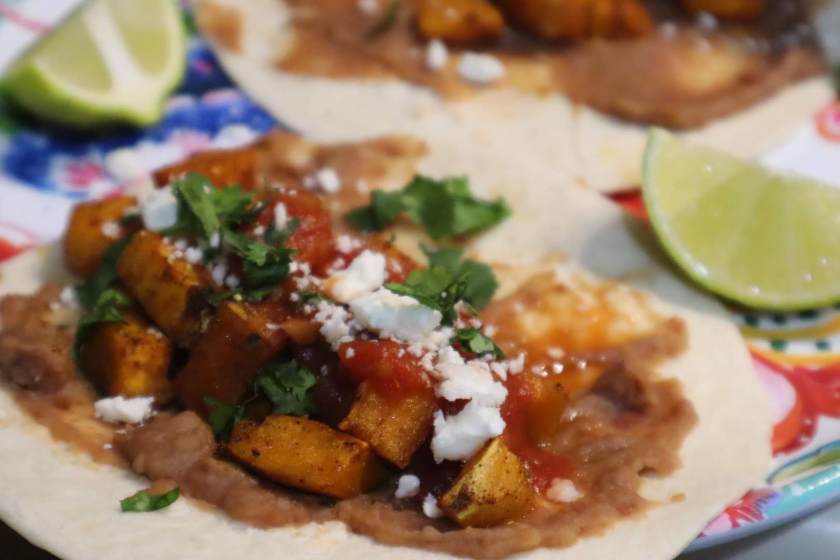 If you want to make this Gluten-Free, you can use corn tortillas instead of flour tortillas. It’s your choice which type of tortilla you want to use for your taco. This recipe is easily vegan if you don’t use any cheese or sour cream on the taco. Instead use avocado for the creaminess of cheese or make cashew sour cream to put on the taco.

This recipe is easily adaptable for what you like.

What you need to make the recipe:

When I made mine, I topped it with lime, Feta cheese, salsa, and cilantro.

July 29th, 2019 – Update: The grocery list is incorrect. You need 2 bags of peppers and onions and only 1 bag of mixed veggies.

END_OF_DOCUMENT_TOKEN_TO_BE_REPLACED

I left this blog back in November. It had been a month and a half after my mom passed away. Since then, we’ve had quarantine and my mom’s estate is out of probate. Yeah!

Right before the quarantine, Hubby and I had decided to get new appliances. That was put on pause until stores were allowed to deliver the appliances. (No way we could have done it ourselves.)

END_OF_DOCUMENT_TOKEN_TO_BE_REPLACED

A piece of advice for planning out your meals is to create a list of your family’s favorite meals. That way when you get stuck on creating a menu, you can refer back to the list.

Not only will it help you menu plan, you can also make certain you have the ingredients for some of the meals on hand if what you had planned for dinner does not pan out.  I know there are days I don’t feel like cooking. If I had meals ready to go, I would less likely stop at a fast food restaurant on the way home from work.

I’m going to share my list of 20 meals that my hungry boys and Hubby enjoy eating.  Some of my meals can be frozen or portions can be frozen ahead of time which helps.

The ideas in bold print can be made from items that can be stocked up in the freezer, fridge, or pantry.

Here is a form that will help you make a list of family favorite meals. The form is very simple and allows for 10 meals to be listed. There is also an area for 5 meals that can be easily frozen.

School has begun for everyone in my house. I’ve been back at work for 3.5 weeks. The boys and Hubby went back almost 2 weeks ago.

Life has changed a little bit at our house. Hubby has class on Tuesday, Wednesday, and Thursday evenings. Tuesdays and Wednesday’s are his longest evenings. I’ve begun making slow cooker meals on Tuesday nights, so I can leave the meal in the slow cooker on warm. He will eat some sort of snackish meal before leaving for his 4 o’clock meal and then eat his dinner when he gets home.

In order to make it a little easier to put food in the slow cooker, I have been making freezer kits. I spend a few hours on the weekend putting together some of the kits. I use my own list and also some recipes from The Family Freezer. Pull them out the night before, place them in the freezer, and then dump into the slow cooker. Add any additional ingredients, set the timer, and walk away. Makes my life easier.

Another thing that has worked recently for me is to create a monthly meal plan. I’ve done it in the past and am attempting it again. I hope to keep the momentum throughout the year. It’s so much easier to look at the meal plan and make a grocery list.

My plan is to make a list of favorite family meals so that it’s easier to meal plan for the month.

As you see, I never plan for the weekend. It’s a more flexible time in the week. Check out my August meals to see some ideas for Sunday meals.

Now onto this month’s meal plan: